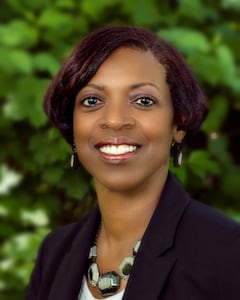 Stephanie P. Anderson, an attorney with the Firm’s Real Estate and Banking Practice Group, concentrates her practice in the areas of transactional law, administrative law and governmental relations. Ms. Anderson gained her legal experience in the Office of Law for Prince George’s County. She developed a strong reputation within Prince George’s County for identifying legal issues and producing results for her clients. Her approach is strategic and collaborative. She understands the process of working with local governments at both the executive and legislative level. She is skilled in working with groups having divergent interests and knows the importance of collaboration to solve problems. Ms. Anderson’s past experience in the public sector will allow her to assist her clients with successfully maneuvering governmental processes. Ms. Anderson was a former County Attorney and Deputy County Attorney in the Office of Law. During her tenure in the County, she worked on several complex business transactions involving public/private partnerships. Ms. Anderson most recently served as Deputy Director for the Prince George’s County Office of Central Services.

Ms. Anderson serves as the President of the Greater Bowie Chamber of Commerce. She also is a Board Member for Habitat for Humanity, Metro Maryland. Ms. Anderson is a member of Maryland State Bar Association, Prince George’s County Bar Association, the J. Franklyn Bourne Bar Association and the Women’s Bar Association. She previously was a long-term volunteer on the Maryland Pro Bono Resource Center Foreclosure Prevention Project where she assisted individuals in Maryland impacted by the national foreclosure housing crisis which began in 2008. Additionally, upon the recognition of the Prince George’s County Bar Association, Ms. Anderson was honored by the Maryland Pro Bono Resource Center of Maryland for establishing a formal Pro Bono Policy in the Office of Law in 2010. In 2013, Ms. Anderson received a Certificate of Appreciation from Governor Martin O’Malley and the Honorable Chief Judge Robert M. Bell for her assistance with housing preservation.